Just when you thought things were calming down with the flow, they’ve bumped the South Platte up some more! We’ve been on a roller coaster this week my friends, with the river flow going from the 290’s, up to our current flow of 479 cfs. Surprisingly, the clarity isn’t that bad. There is considerable moss to deal with, but not as much grass that we saw earlier in the week, with the previous bump in flow. The fishing has settled down a little with the up and down flow increase, but what I’ve noticed is the fish are just going a bit deeper during these periods. One thing I definitely increased this morning was the amount of weight on my rig. I have struggled in the past with not getting my flies down where the fish are feeding, so I made sure to get enough nymphing mud between my 2 split-shots to guarantee my flies would be getting where they needed to be.  With a pink San Juan Worm, trailing a grey Hare’s Ear, followed with a black, two-bit hooker, I was able to put two nice rainbows in the net.  As dusk turns to darkness,  I’ve been throwing an Olive Wooley-bugger by the moonlight. On several occasions, my first or second cast to the bank or the granite wall has produced a large brown, aggressively taking the bugger the instant it hits the water! Obviously, the flow in Cheesman Canyon is also higher today, with a current flow of 488 cfs. One thing you have going for you in the canyon verses the lower Platte here in Decker’s, would be the amount of moss that’s flowing as a result of the flow increase. All in all, the fishing has been good, space is much easier to come by on the river, and the weather has been great! More to come over the weekend, as I plan to fish some of the sections of the South Platte, downstream from Trumbull. Until then, have a great evening and I hope to see you on the river! 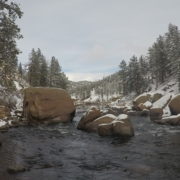