Finally getting back to good health and regular fishing! Here’s the latest on Cheesman Canyon, simply from my perspective! In the last five or six days, flows have remained around 60 cfs. below the dam, with about 65 cfs through Decker’s. As usual this time of year, the clarity of the South Platte is  excellent, with river temperatures in the upper 30’s to low 40’s.  Outside temperatures in the mornings have been frigid folks! Make sure you layer up when fishing the Canyon, as the sun moves quick and your in the shade more than the sun!  The lows in the morning are hovering around 0 at best! Best time to fish the Canyon is from about 11am-3pm, giving yourself plenty of time to hike the Gill trail, which currently is snow/slush packed, and can be slippery!  Spending most of my time between the Emerald Pool and Family Hole, I was able to both nymph and dry fly fish for some fish that always seem to be sipping around the Ice box. These fish are not easy at all! The most success I’ve had in the last few weeks has come from finding fish that were feeding and working them until I figured out what they were keyed in on! Light tippet and stealth approach as been my focus, along with getting my bugs down where the fish are eating. As the water temperature cools and the metabolism of the fish slows, a perfect drift is what it takes to get these fish to take!  Looking ahead to the rest of the week, we’re looking at a high 0f 52 tomorrow, with a cold front coming in late Thursday, which could bring some snow to the Decker’s area. On the information side of things, I would like to point out that as I’ve been driving around the popular areas to fish in the Decker’s area, I’ve noticed quite a bit of illegal, and frankly, DANGEROUS PARKING! Please, my fellow Anglers and outdoor enthusiast, ONLY park in the areas along highways 67 and the YMCA road, in designated areas! These are pretty clear folks! Anywhere you see a brown sign, with the letter “P” along the pullouts on these roads, that’s where you park! NOT IN THE MIDDLE OF THE ROAD! Perhaps this is ignorance or just plain stupidity, but if you see a car that’s parked illegally, snap a picture of the plates and send it to the Douglas county or Jefferson County Sheriff’s departments. As a resident of the area and part-time road cyclist, this is a practice that is going to get people killed!  That’s it for today folks! Hope to see you out there on the river soon! 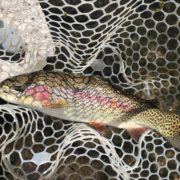 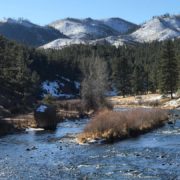